(Reprinted from Volume 5, #10 of our newsletter) 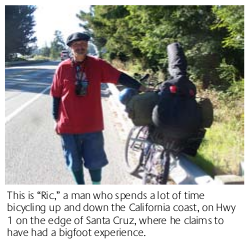 Santa Cruz, Highway 1 at the southern border of Wilder Ranch

A few years back Ric posted a sighting report on the BFRO web site about a sighting he had in April 2002 near Santa Cruz. I contacted him by emails, to follow up on his report with a personal interview. Because Ric is a vagabond and on the road quite a bit, the best I could do was to get a message phone number belonging to a friend of his. A a result, I was eventually able to speak to him by phone and get additional details on him and his sighting, which compelled me to go to the outskirts of Santa Cruz to the area he described to see if the story made sense. In other words, could I find a location right on the edge of town where he could have had the experience he described in his report? Sure enough, there is an area where a creek comes from out of the coastal mountains and passes under Highway 1, only to meander right down to the coast where it 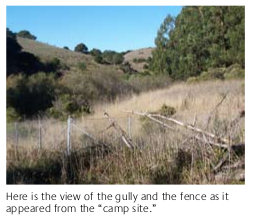 empties into the ocean at Natural Bridges State Park. According to Ric, this is one of only two spots where the forest coming out of the mountains actually continues all the way to the ocean along the coast between Santa Cruz and Half Moon Bay. At least that was his impression based on the many times he’s bicycled along that stretch of the California coastline. What’s more he said that the particular area, right on the edge of town, is in sight of a blinking yellow light that hangs over the highway (at Western Drive) next to the beginning of Wilder Ranch. According to his post he pulled off the highway after midnight and started to set up camp in this cozy spot that is just spittin’ distance from the highway. As he was preparing to bed down, he became aware of something approaching, coming through the tall brush in a gully that empties out of the foothills. He heard it initially and thought perhaps it was deer until he heard a sound like something bulky breaking a limb, which made him think perhaps it was a cow approaching. Further movement of the brush and sounds of footfalls made him reconsider the source of the sounds as possibly a person attempting to sneak up on him. 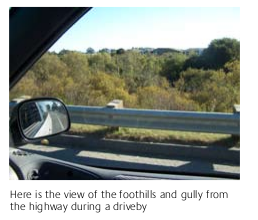 That idea startled him into action, so he scooped up his sleeping bag and jumped on his bike and started peddling up the highway to put some distance between himself and the approaching subject. As he wheeled past and looked down into the gully he saw what he first thought was a person dressed in white rags, cutting a swath through the brush with his arms swinging scythe-like in front of him to clear a path. Then as he watched incredulously, he saw the figure appear to just step over a fence without breaking stride, and at that point he decided he was looking at a heavily built being that seemed to be about 8’ tall and covered in white or grey hair (rather than rags as he first thought.) At this point he decided to peddle on out of there as fast as possible, not knowing the intentions of the creature, which was almost to the spot where he had been just moments before. Ric points to the spot where he saw the bigfoot step over a four foot high fence. - Here is the view of the gully and the fence as it appeared from the “camp site.” 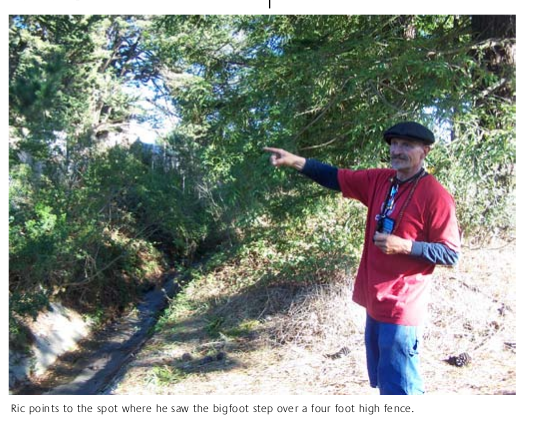 Mike I’ve been to the place where I saw the giant “white” (maybe silver, maybe gray) Bigfoot by the blinking yellow light north of town,… Well it used to be north of town. Now it’s within’ the Santa Cruz city limits. I say living in Santa Cruz. I should say bicycle camping in Santa Cruz. However, I can take you to the exact spot and point out where everything happened where I was, where he (she?) was, etc., because though the spot is changed some over time, everything is still easily recognizable, and basically in the same place. I would be glad to point everything out on the exact spot if you’d like. I’m getting dental work done here in Santa Cruz so I’ll be here for a while, and at your service. It seems we also have some friends in common Jan Burke, and her husband Richard from Ben Lomond who have attended your lectures. Sincerely, Ricardo 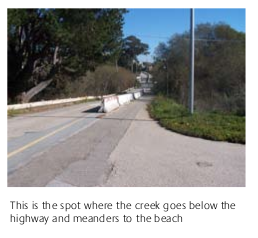 A few days later I went to the location and did the interview right where the event took place. It turned out to be the spot I had first discovered after his initial contact, based on his description. He seemed very sincere and demonstrated the movements of the creature as it swung its arms in a very particular pattern while pushing aside the brush. What’s even more intriguing about this story is the fact that it has been somewhat corroborated by another report I received in the museum a couple of years ago from a man who at the time was working at Lick Observatory. He told me that twenty some years ago he and several of his buddies were travelling near the Portola Redwoods up in San Mateo County. It was after dark when they pulled into the state park seeking a place to spend the night. They went to Ranger Station to get a camp site, but were told that the park was closed for winter, that no one was in the park. The men were insistent 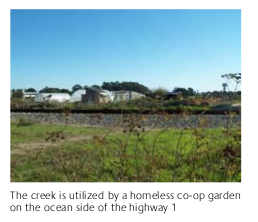 about getting a camp site and pleaded with the ranger, stating they were extremely tired, far from home, but had little money for a motel room. The ranger took pity on them and rented them a camping space. Well, since they were the only humans in the park that night they were amusing themselves by observing the antics of several raccoons who had come by hoping for a handout. Then they decided a campfire was in order and the man making the report (call him “Jim”) and another man set off together in search of firewood. There was enough of a moon present that night so they could make their way up the trail without a flashlight. As the story goes, they were a ways into the forest when they both stopped dead in their tracks, turned and headed back to camp in a hurry. According to Jim’s recollection, neither of the two men spoke to each other about what had prompted them to stop suddenly and rush back to camp. As a matter of fact he said it wasn’t until many years later when he ran into the friend again and while reminiscing over some of their youthful exploits together, that night at the park came up and for the first time they admitted to each other they had both seen what appeared to be an 8’ tall white bigfoot! Now this not the first time I’ve heard a story like this where multiple witnesses are reticent to admit what they saw for fear of ridicule. But I think the description is even more telling, as I don’t think it silly to suggest that one particular bigfoot might be seen in the coastal foothills between Santa Cruz and Half Moon Bay more than once over a stretch of twenty years or more. I would guess that a bigfoot could easily range 50 or more miles through an undeveloped forest area like that, probably traveling north and south in search of food and so forth. -Michael Rugg

22 thoughts on “Sighting along Hwy 1, just outside of Santa Cruz”