Please visit our Blog for up to the minute news and articles about the Bigfoot Discovery Project!  Here you will find our Newsletter Archive, the Sighting Submission Form, The Great Big Bigfoot Poll, Member Pages, and so much more!

Discovering Bigfoot - The Blog of the Bigfoot Discovery Project

Dear Friends of the Bigfoot Discovery Museum and fellow seekers of truth,

First, the good news - Last year was our best ever in many respects, and especially in terms of revenue stream.  Thanks to the many of you who have visited our museum, and a few others as far away as Germany, donations to the museum enabled us to function at a subsistence level for over half the year (we doubled our retail sales as a result). What’s more when we came up against the threat of losing the museum property via a tax auction, fellow Bigfooters from all around stepped up and we met the deadline with time to spare.

On the Bigfoot research front, we had a number of sighting reports locally, most of which took place in the same general area. Responding to these reports we have collected evidence in the form of sleeping nests, scat, and some tracks that we have cast. This has given us a strong case for an ongoing presence less than 5 miles from the museum. We have picked up several new active members this year who are becoming great assets to the project.

This year we also received-as a gift--a 16-mm film reel featuring Roger Patterson, which has been out of circulation for over 40 years. In October we hosted Bigfoot Discovery Day V, featuring Bill Munns, Jeff Meldrum, Bart Cutino and the Patterson reel. In November Ralph Jack and I traveled to Yakima WA and had a very successful meeting with Mrs Patterson. She was extremely grateful to us for returning the missing reel, and was interested in our plan to produce a DVD featuring the newly recovered reel plus the second reel, along with Discovery Day V’s presentations. Our idea was to package all this along with statements from Mrs. Patterson and Bob Gimlin to refute the lies being promulgated debunking Roger’s film of the Sasquatch. We had planned to have these DVDs up for sale to help get us through the toughest months of the year (January, February. March.)

Now for the bad news - We are once again up against a financial crisis that could mean the end of the Bigfoot Project and Museum. Primarily because the DVD project did not happen we have fallen behind on paying some important bills which may result in shutting down operations entirely. (The website has already been shutdown, but thanks to the generosity of a local member a new one has already been started.) The P/G Film project broke down because of some misunderstandings which could have probably been reconciled, had a former friend and confidant not interfered by disgruntledly spreading some untruths and negative rumors about Ralph and myself. That action effectively sabotaged the whole deal.  Its a shame, because the DVD would have produced revenue for Mrs. Patterson and Bob Gimlin, in addition to The Bigfoot Discovery Museum and the DVD producer and would have been a very strong advocate for the reality of the P/G Film.

Right now we are almost $2000 in arrears (shortfall from last month plus this month’s expected shortage). If we don’t raise at least this amount in the next two weeks, the power will be shutoff, as will the Internet connection and the phone. We’ll likely go into default on the mortgage as well. If there ever was a time we desperately needed to raise money it is now.

PayPal to: harrybiped@yahoo.com and thanks for any amount you can afford to give. Please send it our way anyway you can ASAP.

PS Don’t forget it’s the third Sunday of the month coming up… meeting time is 6:00.
Below is an explanation of why we need help and a reminder of why you might want to help.

The Bigfoot Discovery Project & Museum is multifaceted; unique in all the world:

The Bigfoot Discovery Museum seeks -as part of its mission- to set straight absolutely false information about Bigfoot that has been perpetrated by the press and hoaxers. The museum also does what it can to bring together researchers in an attempt to gain greater credibility for Cryptozoology and other forms of scientific exploration and serve as an interface between researchers, academics and the general public.

During the past 7 years we have educated and inspired 1000’s of children, 100’s of students, and 10s of thousands of adults, including more than a few dozen skeptical educators as well. We have been interviewed many times by news media, have been included in a number of TV treatments, profiles, and documentaries and are listed in many Bigfoot reference books. We published monthly newsletters for almost 5 years, and have hosted 5 annual conferences, numerous book signings and lectures.

This year we intend to become officially non-profit, and we are planning to publish-in various media-the results of 7 years of local Bigfoot research. This will include a book filled with local sighting reports, stories and legends of Bigfoot; and a map of areas where BF have been seen from time-to-time In addition we’ll have DVD archives of field reports, eyewitness testimonies, recorded vocalizations, video and other physical evidence. We also hope to raise enough funds to start an ongoing habituation/observation project throughout Santa Cruz County (We already have property owners in strategic places who have agreed to host a base camp; we have a growing list of volunteer wannabe campers as well). With adequate funding we’ll also produce even more events such as lectures and kindred gatherings. 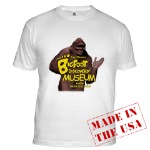